On December 13, 2012, the Journal Sentinel in Milwaukee published a fun article about Clay Aiken.  Clay was about to present his Christmas concert at the Northern Lights Theater, Potawatomi Bingo Casino so the site presented some fun information about Clay in their Tap Milwaukee site.  The article was written by Piet Levy who is the Journal Sentinels’s music writer.  He has also been published in USA Today, the Chicago Tribune and the Washington Post.  The article included a great picture and three wonderful videos. 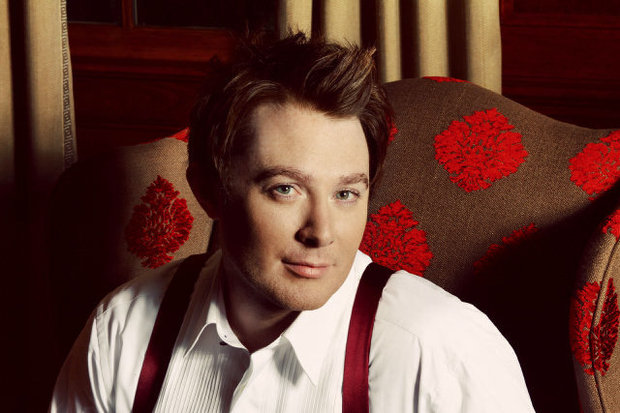 Besides his appearances on “American Idol” and “Celebrity Apprentice,” (on both of which he famously, and unjustly, came in second place), Clay Aiken has earned a reputation in recent years as a musical Mr. Christmas, thanks to the success of 2004 album “Merry Christmas With Love,” (the fastest-selling Christmas album documented by Nielsen SoundScan), and by performing old holiday standards on several different tours across the country.

“I say sometimes to people that I was born about two decades too late for my musical style,” Aiken told me in a recent phone interview. “Christmas music is timeless…and my voice fits the older-sounding, crooner-type stuff.”

This year’s holiday tour comes to the Northern Lights Theater at Potawatomi Bingo Casino Dec. 16 (local Claymates have already snatched up all the tickets). As he’s done in the past, an orchestra of Milwaukee musicians will provide Aiken with musical backing, and a handful of real-life holiday stories will be shared, including a couple that happened to and will be read by locals.

And of course, there’ll be a lot of Christmas songs. We asked Aiken to name his favorites, and while he says they typically “change from minute to minute and day to day,” he said there were three he loves to perform the most.

1. “Don’t Save it All for Christmas Day” – “I do it at the end of the show every night. The message is so valuable and important. We’re so friendly around the holidays, we get shoes for homeless people and are nicer usually, and then January comes around and we forget about that stuff. That song is about not letting that happen.”

2. “O Come, O Come, Emmanuel” — “We change some of the chords and we do a different version of it. I never loved it as a kid, but the producer that did the song for me in ’06, the arrangement of it is spectacular, and I love it for that reason.”

3. “The First Noel” — “It’s the first Christmas song I recorded, for the ‘American Idol’ Christmas album. Again, the producer did a really great job of it. Especially on this tour with the orchestra, its got this really triumphant and incredible brass choir that happens at the end. The brass section just blows the roof off. I love the sound.”

I wonder what three songs Clay would pick today?

What are your three favorite “Clay” Christmas songs?