Clay Aiken Official Biography
This is the new biography. The previous bio can be read here.

Clay Aiken has never sounded more at home than he does singing the lushly arranged classics on his fifth studio album Tried and True — the international pop phenomenon’s first album for Decca Records. The bulk of the album — which showcases Aiken’s powerful tenor voice and considerable interpretive gifts — is made up of songs from the ’50s and ’60s that Aiken grew up listening to as a child in Raleigh, North Carolina.

“My birth father was a musician and my mother sang in a band when I was a little kid,” Aiken says. “There was always music playing in the house. A lot of the songs on Tried and True, like ‘Unchained Melody,’ ‘Suspicious Minds,’ ‘It’s Only Make Believe,’ and ‘Crying,’ are songs my mother used to sing. If folks do think I sound at home on this album, it’s probably because singing these songs came very naturally for me. I never took sheet music or lyrics into the vocal booth. I knew them so well that I didn’t need to.” 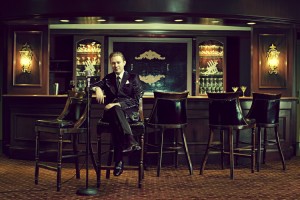 For Aiken, Tried and True (so named because he feels the songs have stood the test of time) was about getting back to himself after a career performing more pop-oriented material. “There are a lot of elements to this album that are about me returning to what I’m comfortable with,” Aiken says. “I’ve often joked with friends that I feel like I was born at the wrong time because the person I am and the songs I like to sing are all from earlier eras. To me, older songs are more melodically appealing and beautiful. So doing this album was kind of an opportunity to just be myself. I’m kind of an old soul, so singing gorgeous orchestral arrangements backed by a big band fits me really well.”

Aiken’s delight in the material comes through not only in his vocal delivery but in the way he connects to the emotional undercurrents running through each of these melodic ballads. With the thoughtful help of executive producer Dave Novik (Decca’s Senior Vice President of A&R), as well as arrangers Chris Walden, Jesse Vargas, and Ben Cohn, the classic standards on Tried and True are respectfully updated and refreshed, but still retain the spirit in which they were written and sung by various legendary artists through the years. “I told Dave Novik that I wanted to do something that paid tribute to the Johnny Mathis, Perry Como, and Andy Williams type of sound, because those artists sang really emotional stuff and did it beautifully,” Aiken says. “I mean, have you ever heard Johnny Mathis sing ‘Misty’? What is he doing with his voice! He’s like some kind of amazing freak of nature. It’s just incredible.”

“Misty” is on the album, as well as “It’s Impossible” (memorably done by Perry Como in 1970 and later by Andy Williams). Tried and True opens with a swinging version of Bob Crewe and Bob Gaudio’s “Can’t Take My Eyes Off You,” made famous by Frankie Valli (“We chose it because it’s a song people remember no matter how old they are,” Aiken says), followed by “What Kind of Fool Am I?” (featuring a saxophone solo by David Sanborn), which has been recorded by Tony Bennett and Sammy Davis Jr. “I tried to steer away from the Rat Pack mentality on this album, because so many people I admire, like Michael Bublé, have done it really well, but Dave introduced me to this one and I discovered what a great stylist Sammy Davis Jr. was,” Aiken says. Country legend Conway Twitty’s “It’s Only Make Believe” is here, (thoroughly de-countrified), as well as “There’s A Kind of Hush” (made famous by both Herman’s Hermits and The Carpenters), and “Suspicious Minds,” which Aiken sang during his 2005 “Jukebox Tour.”

Tried and True also features two songs Aiken sang while appearing as a contestant on the second season of American Idol: “Mack the Knife” and “Unchained Melody,” which is one of his mother’s favorites. “My mom had this dream that ‘Unchained Melody’ was going to be my ticket to stardom,” Aiken says with a laugh. “She always thought she was going to take me to Nashville and I was going to sing that song and have a big hit on the radio with it, so I’ve sang it all my life. It’s exciting to finally have my own version.” Then there’s a song Aiken wanted to perform on Idol but never did, to his regret: “Moon River” (featuring a guitar solo by Vince Gill). “I really wanted to sing it, and [then-executive producer] Nigel Lythgoe told me I should, but I had folks in my ear telling me not to because they didn’t think it was a vote-getter, but I love it.”

And finally, there’s Roy Orbison’s “Crying,” which Aiken performs as a duet with singer and Broadway star Linda Eder, whom he asked to sing with him not only because of her “beautiful, crystal-clear voice,” but also because of her star turn as the ingénue in Broadway’s Jekyll and Hyde. While in high school, Aiken auditioned for a county showcase with that show’s signature song: “This Is The Moment.” “I ended being one of the only soloists in the county who got to sing for this big performance,” he recalls. It was on the very same stage, Raleigh’s Memorial Auditorium, where Aiken taped a live concert special for PBS that will air in June.

It’s just another way that Tried and True feels like a king of homecoming, seven years after launching his career journey on American Idol. After winning over millions of viewers with his phenomenal voice and down-home charm, Aiken parlayed his success into full-fledged stardom. He has sold more than six million copies worldwide of his four albums: the double-platinum Measure of A Man (featuring the hits “Invisible” and “This is the Night”), 2004’s platinum holiday CD Merry Christmas With Love, 2006’s gold-certified A Thousand Different Ways, and 2008’s On My Way Here — all of which debuted in the Top 5 on the Billboard chart. In addition, Aiken has launched nine live tours, made the New York Times best-seller list by co-authoring the inspirational memoir Learning to Sing: Hearing the Music In Your Life, executive produced and starred in his first TV special, A Clay Aiken Christmas, and won several American Music and Billboard Music Awards — all while donating a significant amount of his time to such charities as his own foundation, National Inclusion Project and acting as a Goodwill Ambassador for UNICEF. In January 2008, Aiken made his Broadway debut in the role of Sir Robin in the Tony Award-winning musical Monty Python’s Spamalot.

While admitting Broadway is “a challenge” he’d love to tackle again, Aiken considers the small screen his second home and has made numerous television appearances as both guest and host. He was a correspondent for The Insider for the 2005 Emmy Awards, co-hosted The Morning Show with Mike and Juliet and Live with Regis and Kelly, both in 2006, appeared on the sit-com Ed (2004) and legendary soaps All My Children (2005) and Days of Our Lives (2006). He also made a guest appearance on the comedies Scrubs (2006) and 30 Rock (2009). Popular among late-night talk-show hosts, Aiken has made memorable appearances on Saturday Night Live, Late Night with David Letterman, Larry King Live, and The Tonight Show with Jay Leno. He has a particular bond with Jimmy Kimmel, guesting on Jimmy Kimmel Live! multiple times, usually participating in skits that allow him to show his comedic side. Two years ago, Aiken’s whole world changed when he became a father for the first time. In June, he will launch his first tour since his son Parker’s August 2008 birth: a co-headlining jaunt with good friend Ruben Studdard. The “Timeless” tour, in which the two will perform renditions of classic hits from the past five decades, kicks off on July 23rd in Asheville, NC, and takes in 17 venues across the U.S. through mid-August. “To be able to share the stage with Ruben again is so exciting,” Aiken says. “He is such a talented artist. He inspires me daily and I think that respect and admiration will truly be reflected in our show.”

“Timeless” tour-goers will no doubt be delighted with the classics that appear on Tried and True. “I’ve done well with adult audiences in the past,” Aiken says, “whereas my past albums have been about trying to sing songs just because they might appeal to Top 40 radio, this album is a chance to do what I want to do: Sing songs that I think are great and not try to put a square peg in a round hole.”