The first days of August, 2013 were special at the Ogunquit Playhouse.  It was the opening of the musical, Joseph and the Amazing Technicolor Dreamcoat starring Clay Aiken.

The late summer run of “Joseph” was a huge success.  It brought fans from all over the world to see Clay perform in the show and critics showered Clay and the Playhouse with rave reviews.

Maine and the town of Ogunquit earned many fans too.  The beautiful area was a wonderful place to visit and see the sites…and, oh boy…those lobster rolls were special.

Broadway World published a positive review of Joseph and The Amazing Technicolor Dreamcoat.  The review was written by Scott Moreau.  Moreau is not only an accomplished musical theatre actor, but also a professional director. The review was very long, but the following was especially nice to read:

…First and foremost, I will have to say that I have never watched American Idol. I’ve never been a big fan of the show’s concept, nor am I really a fan of “pop” music. That said, I was BLOWN AWAY by Clay Aiken in the title role. His voice sounds limitless in the role to the point that it almost sounds TOO EASY for his versatile voice. I found myself wondering how many keys had been raised, or how many times he was singing an octave above what was written. His vocal display is truly astounding, and more than that it is always clear as bell and you never struggle to understand what he is singing. It was also refreshing to see a different take on JOSEPH; often times actors choose to make him boastful and almost full of himself. You can see from the very start that Mr. Aiken is a shy, humble JOSEPH who longs to be accepted by his brothers and it’s his naïveté that brings upon his misfortune, not ill will. I was more than surprised by his turn in the second act as the Pharaoh’s right hand man who attempts to trick his brothers. And his rendition of “Close Every Door” will bring you to your feet…

…All in all, JOSEPH AND THE AMAZING TECHNICOLOR DREAMCOAT at The Ogunquit Playhouse is a dazzling theatrical experience from start to finish. JOSEPH may have been done the world over, and you may have seen it a handful of times, but I doubt you have ever seen a production quite like this. Some theatergoers may complain that JOSEPH… is a fluffy piece of music theatre; are you seeing Medea? No. But if you are lucky enough to get tickets to Ogunquit’s latest hit, I assure you that your expectations of the show will be met and exceeded. For tickets and more information, please visit the Ogunquit Playhouse…

Moreau has more positive remarks about the Ogunquit Playhouse and their production of Joseph and The Amazing Technicolor Dreamcoat.  You can read the entire article at BROADWAYWORLD

The stage door was busy after each performance.  Almost every member of the cast came out and signed programs and said hello to the fans. 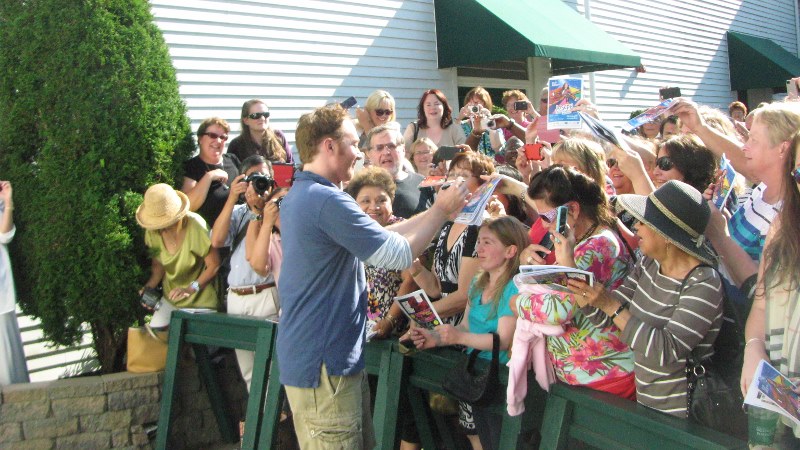 The Ogunquit Playhouse posted the following pictures of the show. I feel so fortunate that I was able to spend a few days in Ogunquit and see Clay in his role of Joseph.

My family enjoyed it as much as I did and I was able to meet up with so many friends.

What a wonderful way to enjoy a summer!