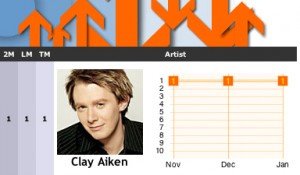 Congratulations to Clay Aiken. He rated the number 1 position on the mainstream AC charts at Promosquad’s HitPredictors.  The results that were just recently published show that Clay was in the top position for the months of November, December and January.

According to the HitPredictor site, the chart is a gauge of an artist’s popularity, above and beyond the song charts.  Every aspect of the artist’s career is a part of the score. Chart performance is impacted by many different things, including marketing, airplay, TV appearances, the Internet and even rumors.

HitPredictor started its Internet based pre-testing in 2003 by turning to real music fans for their opinions.  A list of several hundred artists is compiled and the artists are rated by carefully screened music fans.

Songs are blind tested online by Promosquad using multiple listens and a nationwide sample of music consumers.  Songs are rated on a scale of 1-5;  final results are based on weighted positives.

Promosquad is a company that was founded on the axiom that radio is vibrant when it comes to delivering new music to the listening public.  They feel that radio still remains the biggest factor in the discovery of new music.  Tim Richards. A Clear Channel Programming VP says, “Today’s work schedule makes it more difficult to dedicate a lot of time to new music.  HitPredictor is a great tool for staying on top of music trends.”

So, in spite of the lack of radio support for Clay Aiken, he still is at the top of the charts.  Just think about the hits he would have if he had some support from the record executives who are supposed to be in his corner.

For more information on Promosquad/HitPredictors, check out their site.
http://www.hitpredictor.com/mainac.artistchart.php