is singing loud for all to hear!

On Thursday, December 15th, 2016, Clay and Ruben Studdard were guests on The View.  They sang together and talked about what they have been doing since their “Wins” on American Idol.  It was fun to see them singing together on TV.

And…it seems the appearance was fun for the press too.  So many news and entertainment sites picked up the story.

The holiday season brings friends and family together — or, in the case of Clay Aiken and Ruben Studdard, two former competitors. The two American Idol alums reunited Thursday (Dec. 15) for a special duet on The View.

Surrounded by a sea of tinsel and holiday decorations, Aiken and Studdard delivered a stellar performance of “This Christmas.” To make the situation even better, they wore matching red sweaters. 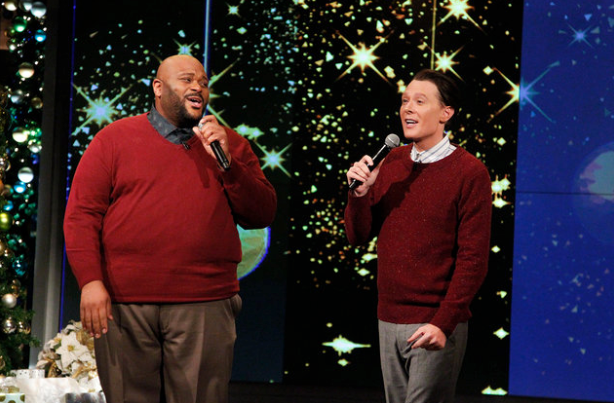 Following the song, they shared that it had been 13 years since they last performed together — though Aiken reassured the crowd that they stay in touch: “We Facetime once every week or so,” he said, to which Studdard nodded in comforting approval…

You can visit the article at BILLBOARD

More than 13 years after competing on American Idol, season 2 finalists Clay Aiken and Ruben Studdard reunited on The View Thursday — all in the name of Christmas joy!

Performing “This Christmas,” the Idol alums gave their first TV duo performance since their days on the reality competition series in 2003. They even had matching red sweaters to add to the holiday cheer!

Studdard won the coveted first place recording contract prize on the second season of the Fox series, with Aiken coming in second. Despite the long break between televised performances, the pair toured together in 2010 and shared that their tight-knit friendship has been going strong since they met. “He was one of the first people I actually met during Hollywood week and we’ve been friends ever since,” Studdard said…

You can read the rest of the article at ENTERTAINMENT 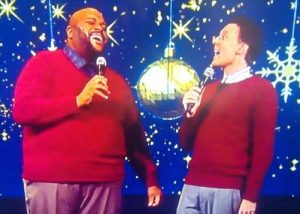 Clay Aiken and Ruben Studdard had an “American Idol” reunion on Thursday’s “The View” for a special Christmas performance. Watch below!

Studdard, of course, won season two of “Idol” back in 2003, with Aiken coming in second place. But there wasn’t much rivalry between them. In fact, the two have remained friends over the last 13 years.

Still, they shockingly haven’t performed together on TV since their days on the FOX competition. Now on the ABC talk show, Aiken and Studdard reunited to perform “This Christmas.” Aiken started the track out in classic fashion, before the “Velvet Teddy Bear” (a.k.a Studdard) came out to add some R&B flair…

You can read more at GOSSIPCOP

There were many more articles about the appearance.  Clay, Ruben, and The View even trended on Twitter after they sang!!!

Fortunately, there is a You Tube of Clay and Ruben singing.

I wish Ruben and Clay were singing together again this holiday season! 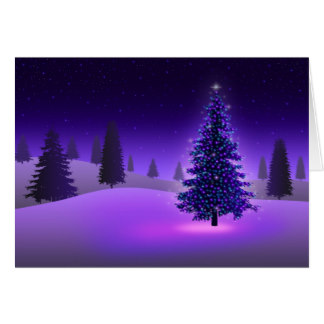