It is always easy to post when you come across a positive mention of Clay Aiken and you have the pictures and videos to help out.  I stumbled across this article and, although it’s not new, I did not remember reading it.  I bet some of you need a refresher too.

In 2006, Clay was out and about promoting his Cd, A Thousand Different Ways.  One of the most interesting stops was to record the Walmart Soundcheck.  This event produced some wonderful videos of Clay singing some of my favorite songs from the album.  The following is the some of what the Wal-Mart Soundcheck crew wrote about the event:

The Wal-Mart Soundcheck crew made their way back to one of its favorite locations, Conway Studios in Los Angeles, to meet up with one of America’s top young singers – the charismatic Clay Aiken.

New Look, New Songs
We met up with Clay backstage in the green room and discovered a whole new look for the former Idol star. Besides the dramatic new appearance, we were briefed on and listened to pieces of the new record. It was a humbling experience to get to hear songs that the legend Clive Davis helped pick out personally for Clay.

The Love of Music
Clay’s one of the most laid back, gracious guests we’ve ever had at Soundcheck and his passion for music is clearly evident. “I like being able to say I do what I love, and not many people can say they love what they do for a living these days,” he said. “Everything that’s happened to me is because I’ve been open to opportunities as they presented themselves. So I don’t really think about where I’ll be in five years, I think more in terms of being happy and letting happiness lead my path.” 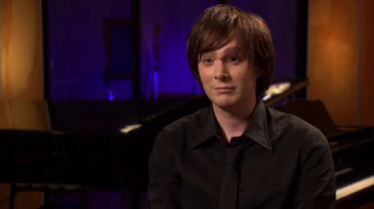 The Love for His Fans
There’s a reason this man has so many ‘Claymates.’ “It’s really all about the fans,” Aiken says. “I say thank you a lot, and it’s really not a big enough word; so let me say it again how much I appreciate their support for allowing me to do what I love to do.”

A Royal Treat
We weren’t sure what to expect in our first session with Clay. We had heard that he was a nice guy, but one never knows with fame and success. But we’re pleased to say that the Clay Aiken everyone came to love is still the same Clay Aiken of today. He is without a doubt one of the nicest artists we’ve had the pleasure to work with on the show, and can clearly see why his fans are so loyal.

-The Crew at Wal-Mart Soundcheck

I always enjoy reading articles like this.  The more you know Clay, the more you love and respect him!!  I am posting the interview and two of my favorite songs.

Had you read this review before?

Which is your favorite song on ATDW?