Did you see Clay Aiken on television Tuesday morning?  He was featured on a segment on HLN.  The show titled MichaeLA features the polished and energetic Michaela Pereira.  The show is 2 hours and filled with news, features guests, information, and fun too. 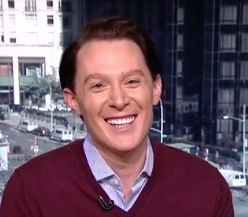 As always, Clay was articulate, knowledgable, and seemed to enjoy being on the show.  He looked relaxed and happy to be there.

If you missed seeing the show, you can see it on our Facebook page.

The video is just Clay’s part of the show!

The Internet has been filled with mentions of American Idol this week…..Wait…Wasn’t last year the final year?  Well according to Entertainment Weekly:

The producers of American Idol are in talks to reboot the singing competition series — but not on Fox.

Instead, NBC is kicking the tires of the iconic reality show, which for years dominated the Nielsen ratings before it was canceled last year.

Variety first reported the news that Fremantle Media was pitching a revival of the show to NBC. Sources caution, however, that a deal isn’t hugely likely — NBC already has the top-rated singing competition in the fall and spring (The Voice), plus the top-rated talent show in the summer (America’s Got Talent).

Also, Idol was axed for a reason. The series was expensive due to its ambitious format of nationwide auditions, live results shows, multiple episodes per week and a celebrity-filled judges panel (the 15th and final season had Harry Connick Jr., Keith Urban, and Jennifer Lopez).

Any revival would probably look for ways to both freshen the format and cut costs. NBC would also likely have to reduce its current commitment to The Voice (which has been softening in the ratings but is still quite formidable). Adding Idol into what’s already a successful competition series lineup would have NBC betting on a rather big, well, x-factor.

You can see the article at Entertainment Weekly.

I found a great YouTube that highlights Clay Aiken on his journey on American Idol.

How lucky we are that Clay Aiken was on American Idol!!